Housing is a major issue in San Jose. According to the U.S. Census, the median value of a house in San Jose from 2013-17 was $714,200, while the national median value of a house from 2013-17 was $193,500. The median income in San Jose is $96,662; the national median income is $57,652. Figures from the National Center for Education Statistics state that the national average teacher pay is $58,950. San Jose pays their teachers more than the average, according to Glassdoor.com, which estimates that San Jose pays their teachers on average $71,009. San Jose teachers cannot afford houses in San Jose based on those statistics. 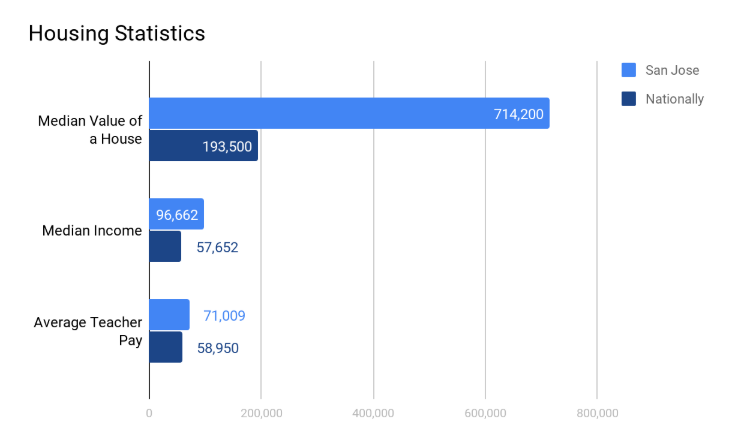 San Jose and national statistics about housing and income

San Jose Unified has proposed to build affordable housing for teachers on some of the land that San Jose Unified owns. One of the proposed sites for the building of affordable housing is the campus Leland and Bret Harte; San Jose Unified would then build a new school at a different but nearby location. This has sparked outrage from residents of the area. Many fear that the proposed plan will lower property values in the area, and they don’t want their children to change schools. This has resulted in a petition from Almaden residents to “Save Leland and Bret Harte,” which has received over 5,000 signatures.

“Among the most pressing challenges resulting from today’s changes is our area’s cost of living. Silicon Valley is becoming more unaffordable for more and more people in our community. San Jose Unified is feeling this acutely. Bus driver, teacher, administrator–San Jose Unified has vacant positions throughout the district”

Kimberly Meek, a trustee on the Board of Education who represents several schools, including Leland, talked about the motivations of the proposal: “Looking at our properties to see if we are using them the best way for our students and families in the area. We need to be looking ahead at the decisions we make and how they will affect our future generations.”

Ms. Meek clarified that the proposal is only in the early stages and that the estimated cost is unknown: “We only wish to investigate the schools as possible locations. This was a public announcement that we are looking at using the sites differently.”

Ms. Meek said the amount of units that would be built has not yet been determined: “Right now we are trying to figure out how many we could build. We are looking at school faculty as well as teachers because it is very difficult to live in the Bay Area on their salaries.”

According to Ms. Meek, the schools were chosen based on “where we have the best ability to serve our community. Leland and Bret Harte were chosen because they are at capacity and students are put on wait lists. On the other end, at schools like Gardner Elementary, who has just under 400 students, you still have to pay for things like electricity. Location and enrollment are major factors in the consideration for the proposal. We are trying to look at all these schools and examine how realistic they are.”

Ms. Meek said that a similar proposal in Santa Clara Unified “served as a model of someone who has done it and done it successfully; all across California there is a recognition that our workforce needs housing. Look at universities – they build housing for professors to attract professors, so we are applying that model to elementary school, middle school and high school.”

Deputy Superintendent of San Jose Unified Steven McMahon discussed over email the difficulty of recruiting and retaining teachers: “San Jose was recently rated as having the least affordable housing in the United States, with the median price for a home set at $1.3 million. We are losing dozens of employees due to the cost of living here in the Silicon Valley (approximately 200 teachers this year alone), especially when the staff member wants to start a family. Many of our best and brightest teachers, when they want to start a family of their own, are relocating because they can’t afford to buy a house near where they work. We have some employees who commute up to four hours a day to and from their schools just so they can live in a more affordable area.”

Mr. Mcmahon said housing is an issue for everyone in the Bay Area, not just teachers: “Although home prices have begun to soften ever so slightly in the San Jose metropolitan area, by and large buying a home in Santa Clara County has become vastly more expensive. Home prices in the area have steadily risen over the past decade. This isn’t a teacher issue. Being able to afford housing, both for those renting and for those purchasing, is a challenge for many hard-working people.”

Mr. McMahon said the plan is still in the early stages: “Some communities, when they first heard of the plan, felt the plan was further along than it really was. In reality, we are a public entity, operating with the utmost transparency. When we released information about the plan to look for ways to create affordable employee housing, that’s all it was – and still is – a plan.  Nothing, other than the initial thoughts of possible sites, has been put on paper. Everything we have said and done has been discussed in a public forum, and we invite everyone to join us for the twice a month Board of Education meetings held at the District Office.  The agenda is posted online and available for viewing on the main website before each meeting.  The public has the opportunity to comment on or listen to what is discussed at the meetings. For those who follow the agenda items, they were not surprised when San Jose Unified announced the plan to develop potential staff housing.”

He went on to talk about the motivations behind the proposal: “The goal of this plan has always been to explore how to best meet the needs of students and staff throughout the entire district. We see it as an exciting opportunity to find an innovative way to address a very real need while providing the best services to all of our 30,000 plus students. Sometimes reaching for goals means thinking outside of the box and asking ‘What If?’. ‘What if’ we provide employee housing for some of our 3,000 strong workforce?  Hopefully, this enables us to continue to recruit and retain the best and the brightest of teachers and staff as we continue to provide excellence in education to our students. Looking toward the future, we see the cost of housing continue to rise in San Jose, one of the most expensive places to live in the country and a major factor when recruiting and maintaining exemplary employees. By opening up this conversation, it allows us a chance to look at options across the district. Options that could help us reach our goal of better serving our students, improve imbalances across schools and provide needed employee housing.  Bret Harte and Leland were never discussed as sites to close, instead these two schools would receive new state-of-the-art campuses.”

Mr. McMahon talked about the reaction he has received to the plan: “Each of our school communities is unique and respond in different ways. We believe we need to look district wide for a solution to the housing crisis faced by our employees. We are proud of our schools, our students and our staff and want to continue to be able to provide the very best in educational opportunities to the communities we serve.”

When asked for comment on the proposal, Leland principal Peter Park said over email, “After the initial announcement from our district office that we were one of the nine sites identified for this possibility, we haven’t received any more information. At the site level, we are focused on the day-to-day instruction, thus have left the details of housing to the district.”

When asked about the feasibility of living in the Bay Area on a teacher’s salary, Elizabeth Rodriguez, a physics teacher at Summit Tahoma, said, “I think it is unrealistic, especially because students are graduating college with degrees like engineering and have starting salaries of $70,000 or more. It is unrealistic to live in a tech-based area when you are a teacher and the rent keeps on increasing.”

Ms. Rodriguez said that housing costs played no role in her decision to teach in the Bay Area “because when I moved from New York to San Jose I was looking at job/school where I am closer to my family. So I didn’t really think about the costs of moving to the Bay Area. I was paying more for a two-bedroom apartment in Japan Town than a four-bedroom apartment in East Harlem; it was a shift in how much rent I needed to pay each month.” 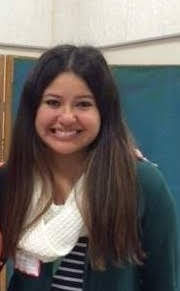 When asked if she would support a proposal for the school she teaches at, Ms. Rodriguez said, “This is a really tough decision; while it seems like an answer to a big problem, it is ignoring the biggest problem in the area. We need to evaluate the amount we are paying teachers. In the short-term, it will work for some teachers; but in the long-term, it is not feasible. In the long-term, our education department in California should reevaluate the amount we are paying teachers.

“No. It does not impact my decision of where to teach,” said Ms. Rodriguez on whether affordable housing would affect her likelihood to teach at a school.

Kevin Franey, a history teacher at Summit Tahoma, said, “The current rate that teachers are paid in public schools is not a sustainable way to live.”

Mr. Franey talked about the role housing costs played in his decision to teach in the Bay Area: “I can’t say that it played a major role. My wife and I were moving out here, and I knew I wanted to teach. Had I come out here by myself it would not have been possible, because we are a dual-income household it was possible.”

Mr. Franey supports the proposal for affordable housing: “I think the Bay Area needs more affordable housing, especially for teachers. If those sites are not needed for schools anymore, it makes sense to use them for housing.”

When asked about utilizing affordable housing if given an opportunity, Mr. Franey said, “I would certainly consider it. Generally, housing programs like this come with a lot of restrictions. It would depend on if the restrictions interfered with my life outside of school.”

Evaluating the pros and cons of Elon Musk’s Neuralink

By Kristen Dalida and Kate Goshko Staff Writers Imagine a world where the entire Internet is only a thought away, literally. Neuralink, a neurotechnology company,

Summit Denali students discuss the impact of technology on music