Posted on November 11, 2018 by Matthew Goncalves Leave a comment

Circles are when mentor groups gather around the middle of the classroom and talk about what is happening in each of their daily lives. Two people bring an artifact that means a lot to them every time there are Circles, in order to build a strengthened relationship. Circles are what mentor groups and Expeditions classes do to feel more connected with the people they are with and to feel a sense of belonging and acceptance. Circles are also a way to support others and to focus on the successes and stresses of a student at Summit Public School: Shasta.

At Summit Shasta, students interpret community through structures like Circles and mentor time. Mentor groups consist of about 30 students with one faculty mentor. They stay together throughout their four years at Shasta and do activities together every day, in order for the students to become closer with each other.

Both were able to reflect on the effects of mentor groups and Circles for their own mentees. During her interview, Ms. Morris remarked personally about the issue, saying, “I think that the mentees are starting to get more comfortable and are getting out of their shells, but they’re still a little shy and still fool around in Circles during mentor time, but are slowly starting to take it more seriously. We mess around, and I refer to them as my kids.”

Ms. Morris also said that she has been teaching for 17 years and that she has never felt welcomed into such a strong community as Shasta.

Ms. Mogannam pointed out that Friday mentor time, as well as Circles, help bring about many interpersonal relationships and “a sense of belonging” within the mentor group. “It’s important for students to feel like they are part of something,” she added. Ms. Mogannam also believes that the collaborative group work Shasta projects impose are also important in building community.

Shasta freshman Zachary Smith said, “Community here is really good. Everybody’s all friends. There is no popularity pyramid and the school being relatively small helps there be more unity. People here are ‘real.’ My mentor group always talks, but they’re friendly and they’re becoming family.”

Shasta freshman Charles Cornelison said that one of the biggest integrations of community are the check-ins because they can give a sense of how people feel and “it’s a way to open up” within the mentor group. When Cornelison was asked about being accepted into the Shasta community, he said, “No one shows any signs of not accepting me, and community is a thing you can’t really force people to be with each other. It just happens.”

Smith also said that community at Shasta is very strong and argued that students can’t get that at other schools.

Other Shasta freshmen who were interviewed include Samuel Zhang, Xavier Margate and Gerious Heishan. While they all gave short answers, they were still able to reflect on Shasta’s community in a neutral, if not positive, light. For example, they all stated that some of the ways this school builds community is by having clubs and joining sports.

The interviewees also included Shasta junior Nani Tafilele, Shasta juniors Kayla and Shayla Branner and Shasta senior Joseph Madrigal. They all were in agreement about the usefulness of different elements of Shasta and how those elements contribute to the school’s sense of community.

The Branners both agreed about the helpfulness of Circle, a tradition at Shasta where students of a mentor group gather around a circle and have a check-in with one another as well as “talk about how [every student is] doing and any work we have.”

Nani Tafilele pointed out that 10-minute time, which is a daily gathering of the mentor groups for 10 minutes, is “like a lightweight break after lunch to hang out with your mentor group and your community.” Madrigal added on, saying that Circle “inspires the feeling of community at Shasta.”

The Branners, Madrigal and Nani Tafilele all agreed that the student body “should break boundaries and get to know each grade more.” Madrigal believes that it is the “only way things can get better” for Shasta’s community.

They also pointed out that there should be some sort of activity that makes the mentor groups interact with each other. According to Nani Tafilele, “We should get to know other mentor groups and other grades so we can think differently of [them].”

However, there were other students who felt negative toward Shasta’s integration of community, including Shasta senior Gabriel Marroquin and Shasta senior Sa’i Tafilele, Nani Tafilele’s sister. Both of these seniors expressed their feelings with the use of strong and profane language.

Sa’i Tafilele said she feels that teachers are always talking about how she is “loud and disruptive. Like, boi, I’m just trying to make your classroom fun.” She added that she does not feel accepted: “People always got something to say about me.”

Sa’i Tafilele also reflected that improving the community requires “[improving] the people,” since she believes that the entirety of the community revolves around the people and that people should be less judgmental. 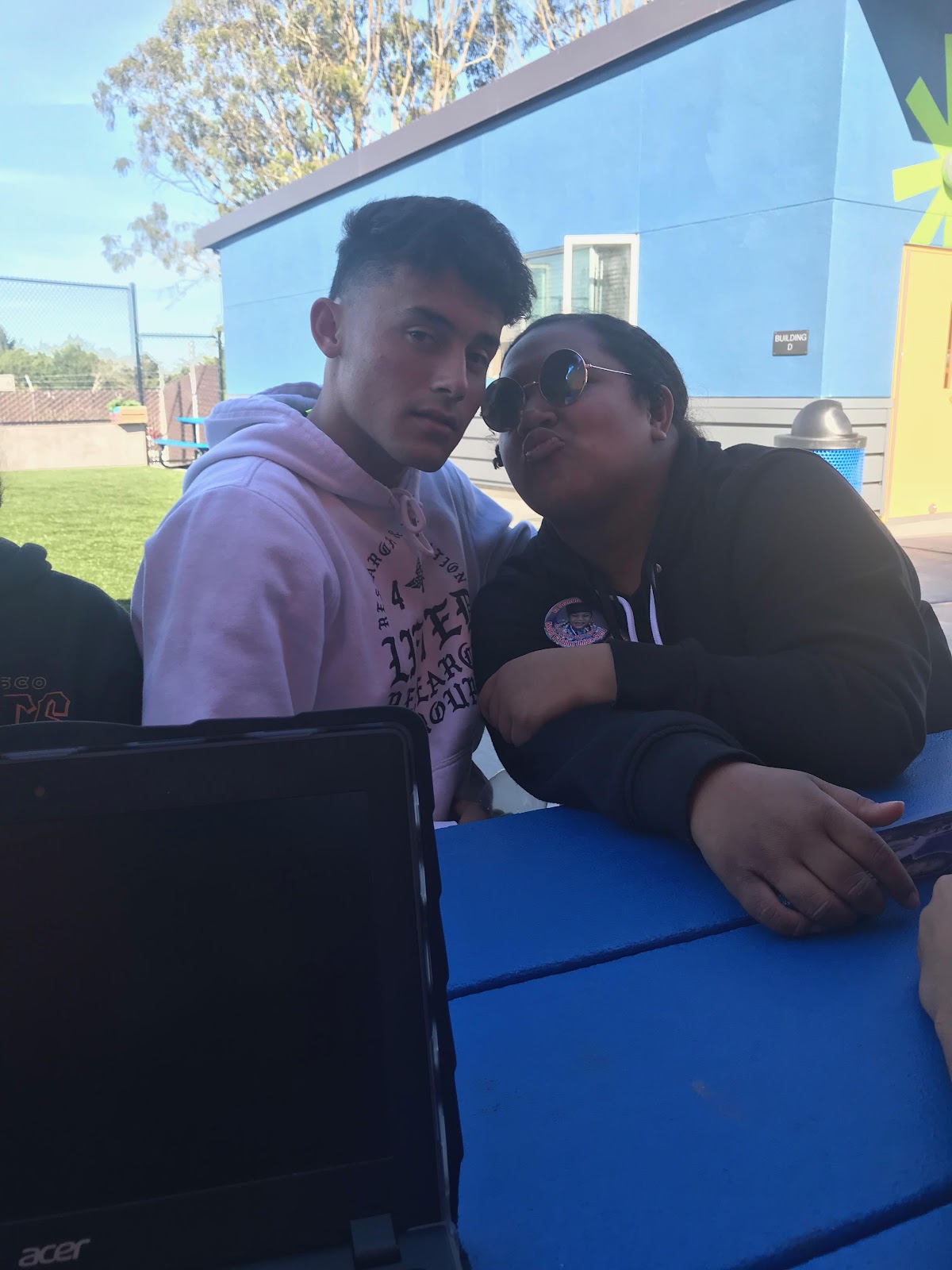 Marroquin also felt the same way, saying that teachers always had something to say about him. “I feel like some of the teachers, they think, ‘Oh, Gabriel’s disruptive. Gabriel’s this. Gabriel’s that. Gabriel’s whatever.’ I am whatever!” he cried. “Accept me for who I am, period!”

Marroquin believes that improving the community would require “having more group discussions, open discussions without judgment. And it should be with a group of students and a group of teachers, preferably the ones we dislike. So, we could give them our opinions and they could give us their opinions on what we do.”

Adding on to interview data, there was time for a survey to be created for the student body. It generated 141 responses, which is roughly one-fourth of the student body, but the majority of the responses were from freshmen, who formed 60 percent of respondents.

The range of survey data included a majority of freshman respondents.

One of the questions included asked students how strongly they feel that mentor groups help them feel like part of the community, judged on a scale between 1 and 5. The average number was 3.22, meaning that students felt neutral toward this idea.

These survey results show how students feel about how well mentor groups bring others into the community.

Despite that, the survey data also showed that students slightly feel that their mentor group happens to value a sense of community. On a scale between 1 and 5, the average answer was 3.68.

It is clear to see that the student body has a slightly stronger belief that clubs help students feel like there are other people who share their same interests. According to the data on this question, the average answer was 3.81.

These survey results reveal how students believe clubs enable them to build community around shared interests.

Overall, there is much variation between students as they ponder the thought of Shasta being a true community or not. Between mentor groups and particular teachers, certain different approaches result in varying student opinion. For comparison, many of the freshmen who were interviewed felt like they were accepted and that “everyone is friends,” while a few of the seniors felt like they are not accepted.

Shasta Dean of Culture and Instruction Adelaide Giornelli explained why she thought some freshmen and seniors might feel differently. “Seniors have been here for four years and freshmen have been here for one, leaving a larger amount of time for relationships to develop,” she said. “They’ve known each other for longer; there are longer times for relationships to develop – they could go wrong and may not be healed all the way.” She added: “As for the freshmen, they’re new.”

In retrospect, it seems as if students’ experience with community at Shasta is totally varied from person-to-person. Does that mean anything? It could mean that Shasta needs to improve their methods in implementing community in Shasta culture.

Ms. Giornelli described how Summit Shasta is relatively new and still building a community. She said, “When the seniors first came here, the school was only three years old.” She added: “Every single year we have been making improvements in the community, and, now that the freshmen are here, this school is six years old.” Ms. Giornelli feels that Summit Shasta has been doing a good job in improving community over the years.

Evaluating the pros and cons of Elon Musk’s Neuralink

By Kristen Dalida and Kate Goshko Staff Writers Imagine a world where the entire Internet is only a thought away, literally. Neuralink, a neurotechnology company,

Summit Denali students discuss the impact of technology on music